No video this time, as this was supposed to be a 1-hour job… that ended up on the back burner with all the other projects for 3 months. Paying customers come first…

This is a Quad CD99-II, a friend asked me to check why it no longer read discs. Apparently it had been reading only about half of them for a while, and when that symptom was ignored, it had stopped altogether.

Now before you ask: NO! I don’t do repairs! Consultancy fees are much too steep and days much too short for that. This was a favour for a friend. Unless you live within 5 miles from me and have a well stocked liquor cabinet, you’re not that friend.

Here I thought it just needed a new laser, which would be a 15 minute job. Alas. But I did find an interesting module: The Stream Unlimited CD-80. The story goes that the CD99 was developed to run on the VAM12 mechanism from Philips, which went out of production very abruptly some time in 2012/13 (I remember the late Dieter Burmester desperately phoning me if I, being dutch, could get my hands on any: no, go figure…).

Rather than redesign the player to interface to another mechanism, Quad chose to implement this universal module, which then can work with cheap off-the-shelf DVD(!) drives. And hat tip to Stream Unlimited, full schematics for the module are available.

What was less than ideal is the construction, where the drive is attached to the roof of the player from the bottom, and thus it was nigh on impossible to debug any of this until I wizened up and ordered some very long flex cables, so that the whole contraption could be mounted outside the enclosure. 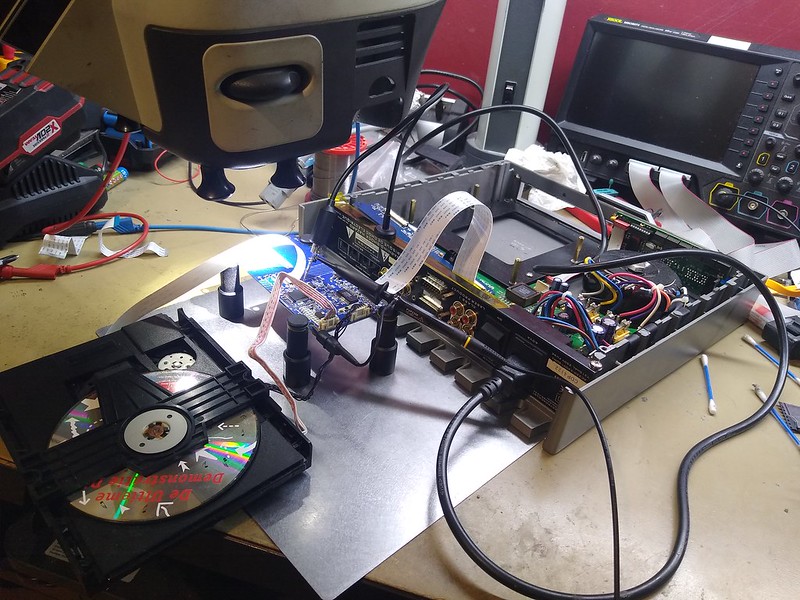 After some searching it turned out that the SAA7824 was no longer outputting power to the laser. This chip was only available from aliexpress and there was the first month of bench waiting time.

In the mean time I replaced all internal cables as they were green with corrosion(!?). This machine had led a rough life – the plastic mechanism was also showing heavy wear and several mounting points were broken. The cable interfacing with the spindle and sled motors needs to be very flexible as the laser module comes down then the tray opens and could pinch the cables against the CD-80 and thus block the whole thing. Ask me how I know.

After replacing the SAA7824 things were progressing: laser light returned, the drive would read and play some discs, but had troubles focusing. You’d be tempted to but  don’t touch the factory calibration pots on the laser! Again, ask me how I know.

Then after playing a few minutes it would suddenly freeze. The motor stopped spinning, the display remained at the last playback time (the Quad firmware probably wondering why the Stream Unlimited module stopped communicating) and it was game over. This curve ball had me scratching my head for a few days, and the only conclusion I could come to was that it had to be something thermal. Out with the thermal camera. 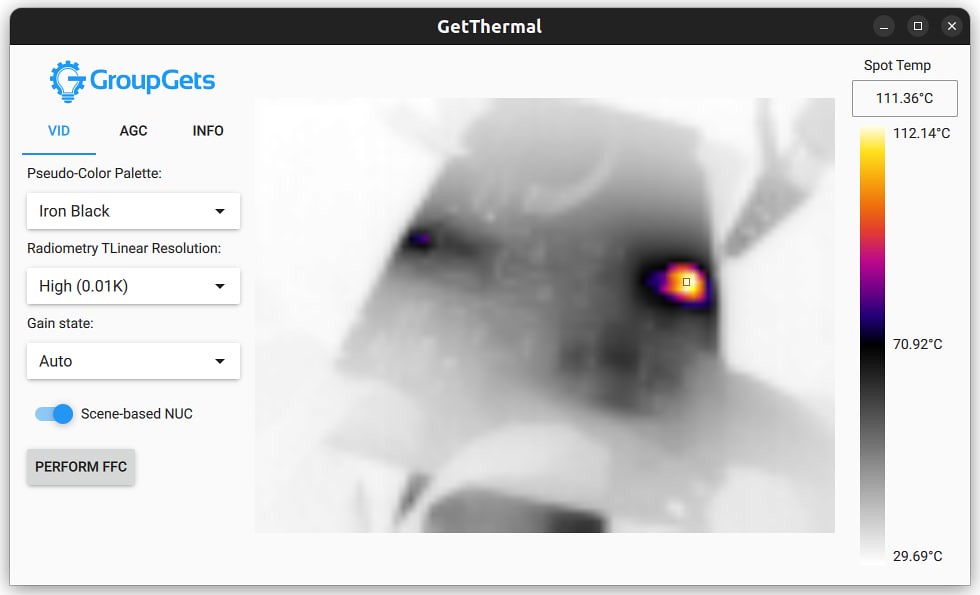 Lo and behold, the main regulator was about 110 degC and on a particularly warm 38 degC day, it would exceed 120. At that point the 3V3 became very unstable, going down 100mV per degC increase, with transient drops to 0V.

The eventual culprit: a dropper resistor from 3V3 to the SAA7824 internal audio DAC supply. Somehow BUF_VPOS/DAC_VPOS was held at GND so the 10R resistor was trying to become a light bulb (no, it was not C128’s fault, that measured OK). 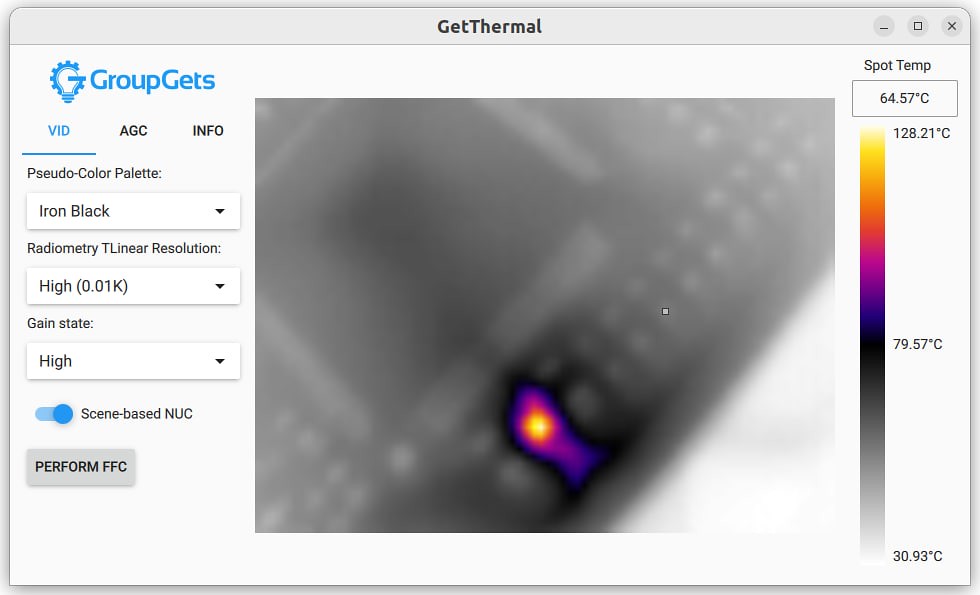 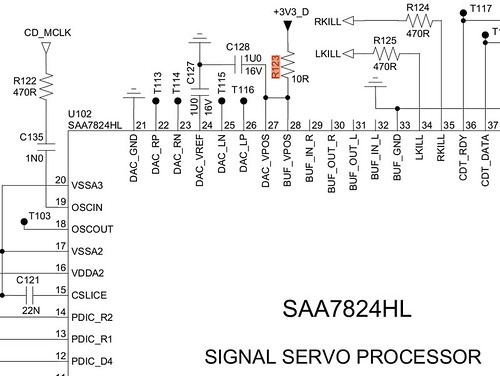 At this point it could be a) a bad solder job by yours truly b) a non-genuine SAA7824 or c) a difference between the NXP SAA7824 and the replacement Philips SAA7824. However, since the CD-80 module is not using the audio DAC on the SAA7824 that entire discussion is moot. I don’t even know why Stream Unlimited hooked it up, given how they don’t connect the DAC outputs to anything. So, off with that resistor and the supply was stable again. Would I even have found this problem if that particular day hadn’t been a 38 degC heat? I’m not sure.

Back to the focusing issues.

I had to go back to memories of my ‘ultranalog’ days to remember how I would fix such a drive in 10 minutes back in the day: I would push and poke the disc, spindle, sled and tray until it started behaving and thus find out why it wasn’t happy. As it looked, the plastic mechanism just wasn’t up to snuff, which is weird because Stream Unlimited even resells it and apparently has certified it.

With some startpage-ing I found that the Philips DVP5140 uses the same WXD8829 tray mechanism and I found one of those players for pennies. This mechanism, although being in much better condition, still was fairly flimsy by design. About 6 out of 10 tries it would load the CD and play it just fine, 2 out of 10 would not focus at all and another 2 out of 10 it would lose focus after half a disc. Not good enough.

More podding and poking yielded that the spindle with the CD, although clamped to the puck by the tray motor, had about 2mm of vertical play from a notch-in-groove tolerance. If I pushed it up and held it up, it was fine. 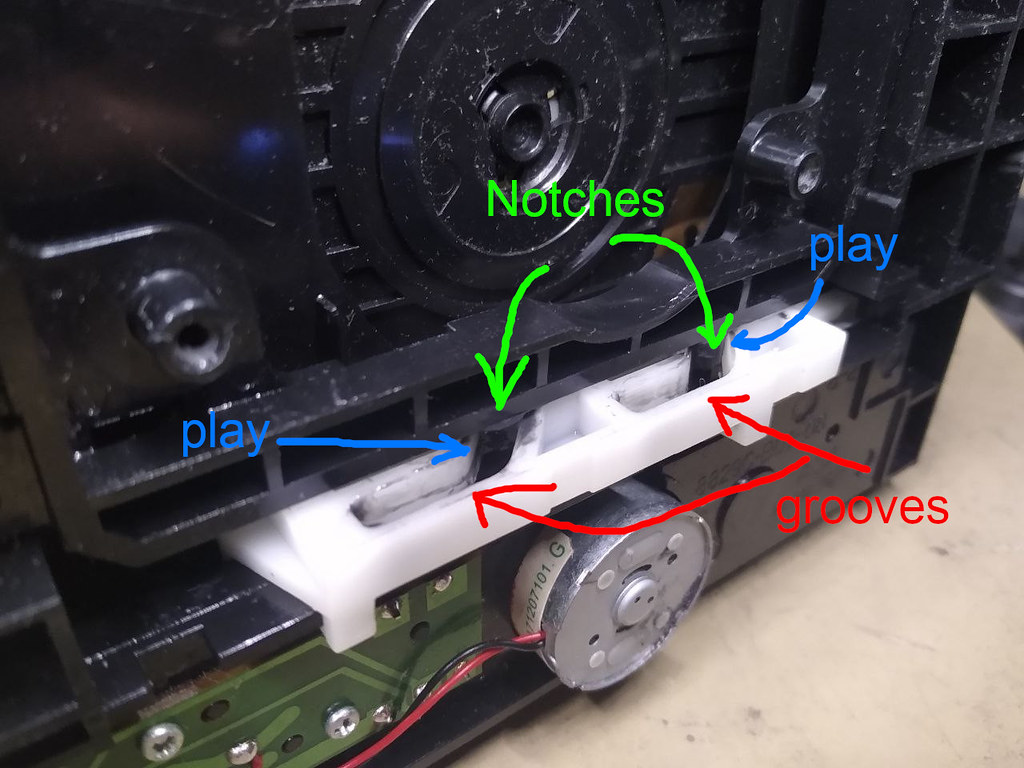 hot dog in a hallway

This looseness/tolerance, combined with the weight of the CD, a little eccentricity / disc not pressed on centering spindle well enough and the low speed the audio disc runs at, was making the whole thing wobble vertically too much for the laser to focus reliably. The intended application of this mechanism was a DVD player, which runs (even for CDs) at a much higher speed (and reads in bursts) where the wobble was not excited.

Yeah, this is not how they used to make’em in the days of the CDM-0.

All it took for the looseness to be eliminated was some heat shrink over the notches, which reduced the play while still allowing unrestricted up and down movement through the groove for ejecting and loading the CD. Ever since the player has been very well behaved, much quieter mechanically (less servo hunting) and the owner is happy. I, for one, remember once again why I stopped using optical media somewhere around 2006…