Over the last few months, I’ve played with many recent D/A converter chips and shown that some of them show quite significant but hidden distortion. The only brand I hadn’t captured yet was one of the world’s most famous – Burr Brown (now part of TI). 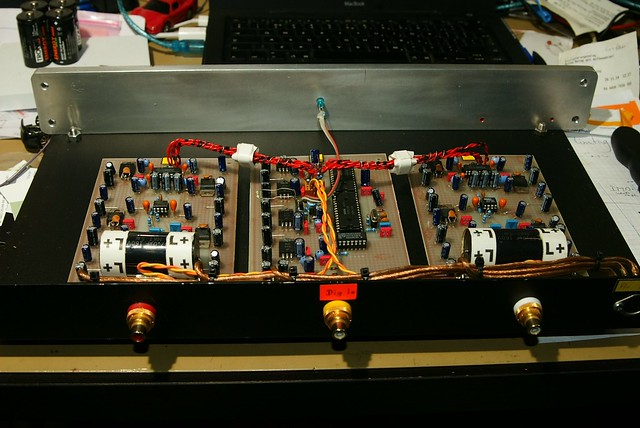 A colleague kindly lent me a D/A converter he built ages ago featuring a complete Burr-Brown chipset around the PCM1702. Kind as this was, it was not exactly the ‘recent’ D/A chip I was looking for. Most noticeably, it is not a sigma/delta design but a good old resistor ladder (R-2R) multibit chip. Then again, I was operating on the principle that the IMD I measured was digital in nature and generated in the sigma-delta modulator, so surely it would be interesting to measure a D/A chip with no sigma-delta modulator at all. 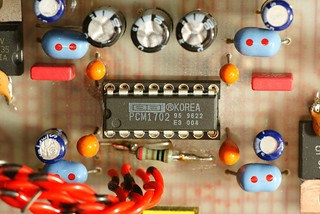 Many people still swear by this technology and are convinced that with the rise of sigma-delta converters the field has gone south. I used a lot of these converters in the 90s (BB PCM63, BB1702, TDA1541) and I remember loving them. So this was a great opportunity to re-connect with that past and see how much if anything has improved over the last 25 years. 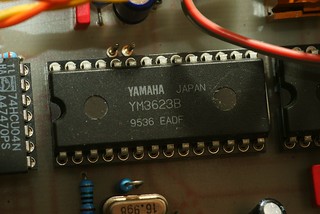 The design was pretty much exactly what is on page 8 of the PCM1702 datasheet. The data is received by a Yamaha YM3623B receiver and passed onto the DF1700P digital filter. 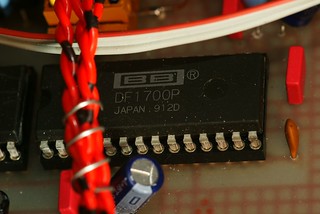 This filter upsamples by a factor of 8 and sends the data out over a parallel connection to the PCM1702. That chip in effect is a ladder network controlled by the digital data and outputting current. 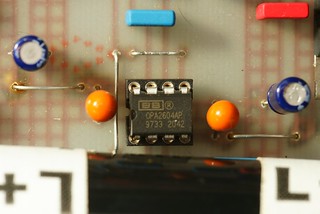 The current output is converted to a voltage and low-pass filtered by some pretty expensive OPA2604 opamps.

So, the design of this D/A converter is given by Burr-Brown themselves and would suggest we can expect some pretty good behaviour.

THD, SNR and so on were all ‘acceptable’, i.e. close to datasheet values and therefore not particularly interesting, although this D/A converter was definitely much noisier than what I’ve grown accustomed to over the last decade. I guess that’s where the volume dogma comes from. With this D/A converter, you would for normal listening volumes like to use an analogue attenuator because the noise at full scale is definitely audible.

Now let’s see if we get DIM distortion. 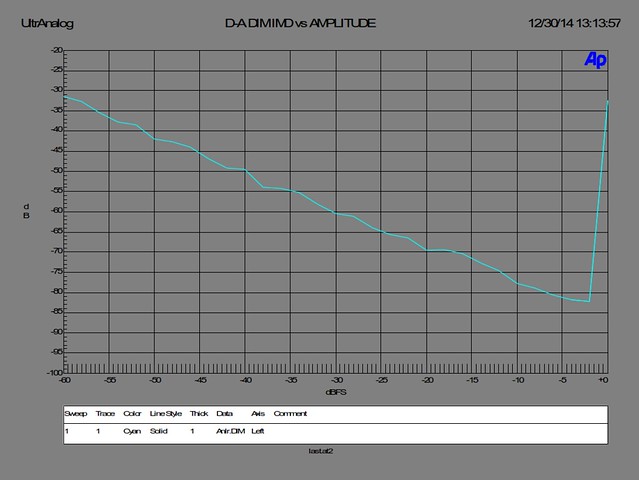 Here we see that relatively high noise level limiting most of the IMD vs. level response (~ -90 dB), but right at the end we see that oh so familiar hockey stick curve. Just as with the sigma-delta D/A converters, it seems to go wrong in the last few dBs. 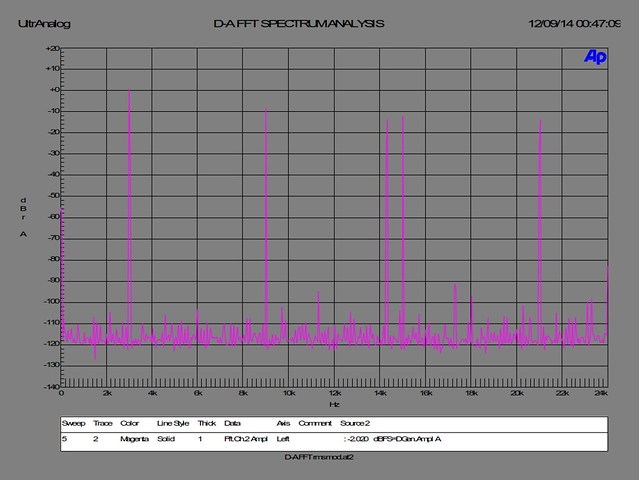 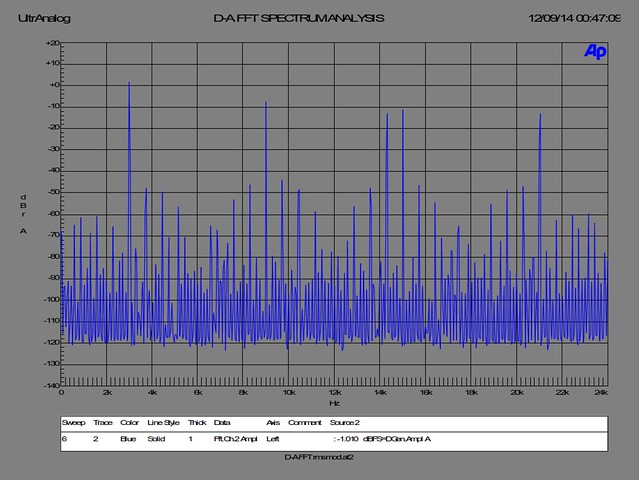 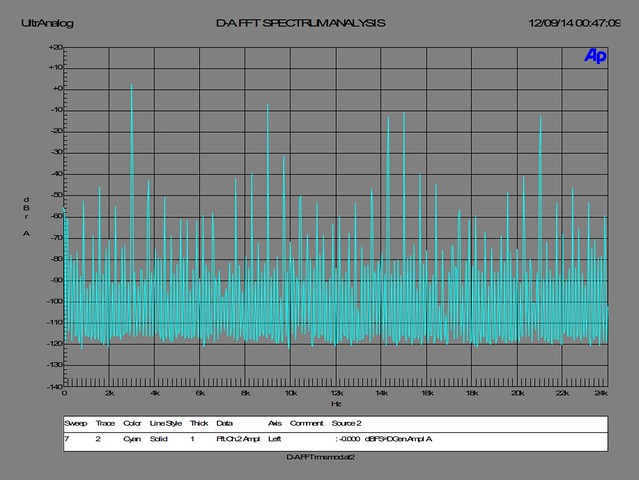 Again we have seen this before. 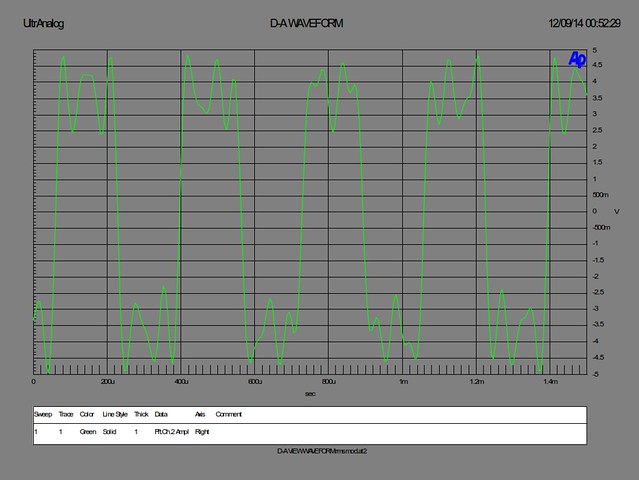 The waveform looks relatively clean, i.e. you can still recognise it as a square wave with a sine on top of it, but there is modulation visible in the sine wave.

We can safely exclude the sigma-delta from this result – there isn’t any! So what we’re looking at here must be an analogue phenomenon. Does that mean that the sigma-delta loop is innocent in all previous measurements? Some digital simulations seem to disagree with that (material for a future blog post).

The main culprit this time is the I/V conversion using the opamp structure as a nullor. A step response on the high impedance input of the opamp has to propagate to the output to cause a voltage change there that allows the feedback network to flush away the input current (remember, no current should flow into an opamp input) and hence form the small signal low input impedance that the current source D/A converter needs to see for linearity. The size of the step response eventually reaches levels where the opamp is no longer acting as a small signal equivalent, e.g. by slew rate limiting, clipping, bandwidth limitations, offset, or what have you.

It is here that the high-end audio scene in the 90s stepped in and came up with a plethora of solutions such as I/V resistors, transformers, discrete nullors, paralleling D/A current outputs, or by limiting the problem’s occurrence rate by moving to non-oversampling. I have personally spent many an hour on the I/V conversion with varying degrees of succes, before moving on to sigma-delta D/A converters. It is nice however, to finally see a measurement to back this up.

I started out by hooking up the D/A converter to my media player at a rate of 44.1 kHz, since the YM3623 datasheet mentions nothing about higher sample rates. In fact, it mentions no sample rate at all, so it stems from a time when there was only one sample rate…

Although it was a good sounding machine for its time, I was done with it pretty quickly. We really have moved miles forward since the 90s, where we are now able to have most of its qualities paired with few of the disadvantages. This for me was a pretty significant discovery. We haven’t just made stuff cheaper.

Then, during disconnect, my streamer jumped back to its normal rate of 96 kHz – and the YM3623 locked. Uhm? I tested some input, and yes, sound comes out. I attached an oscilloscope to the word clock to verify that it was running at 96 kHz. An internet search confirmed that other people have also seen that the Yamaha chip can run at 96 kHz. It also means that the DF1700P and the PCM1702 are now running at 16fs (768 kHz) and seem to be doing just fine! This deserves a separate listening test.

Interestingly I was still playing 44.1 and 48 kHz source material, but the first stage of oversampling was done in software in the media streamer (based upon libsamplerate at ‘high’ setting). Compared to the resources of the DF1700P, this thing has an abundance of cycles to do a pretty damn good job. Of course the DF1700 was still in the loop but what it thought was 0.5 fs was now actually 1 fs, so its filter was moved out by a factor of two and the streamer’s upsampling filter did the heavy lifting of going from 48 to 96 kHz.

Even though the PCM1702 D/A converter chip is still too noisy for me in 2014, it shows that it was the least of the problems of the chain: the digital filter causes whistling and unrest (which usually means aliasing due to rather limited stop band reduction), and the opamp I/V conversion is the main culprit for the IMD measurements. Both problems go a long way to explain the existence of the non-oversampling, resistor I/V D/A converters in the high-end scene, although I’d argue that much better alternatives are available, as the last few months have shown that IMD free, high performing, great sounding D/A converters are now available with all the mod cons such as high sampling rates, much lower noise, digital volume control, voltage outputs, DC servos and what have you.

We really have come a long way over the last 2 decades. I’m looking forward to the next!